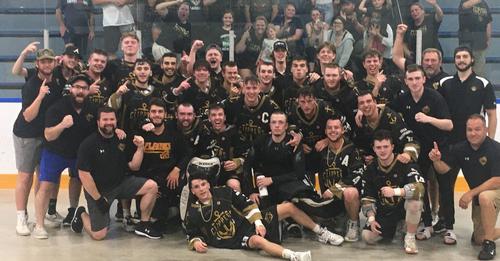 In their third trip to the Western Conference final The Windsor Clippers finally broke through and won. They beat Elora 6-5 win to clinch the conference title. “What a series. It was a war out there.” said head coach Jerry Kavanaugh.

The best-of-five series went the max after Elora overcame a 5-3 deficit in the third to win 6-5 Sunday night in Windsor. Less than 24 hours after failing to get an insurance goal in the final frame, Clippers captain Kaden Brennan made sure the same script didn’t play out. He scored 42 seconds into the third to give Windsor a 6-3 lead.

The defence and goaltender Chase Cosgrove handled the rest.

“Cosgrove was unreal again tonight.” said Kavanaugh whose netminder stopped 54 shots in game 5. “The defence limited their big shooters and our offence got it done.”

Xander Derkatz, who was held to a goal and an assist in the finale, is the overall playoff leader with 62 points.

The Clippers will make their first appearance in the final expected to start this weekend when they face the Eastern Conference champion Nepean Knights starting. The Knights have yet to lose in the playoffs and were 18-2 during the regular season.