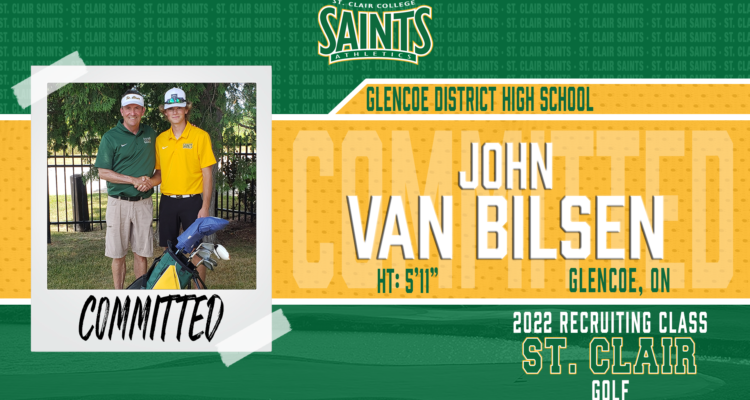 Windsor, ON – The St. Clair College Golf team is pleased to announce the signing of John Van Bilsen for the 2022-23 season.

Van Bilsen is from Glencoe, Ontario just outside of London and will be enrolled in the three year Civil Engineering Technology program at St. Clair after graduating from Glencoe District High School.  John has an extensive amount of junior golf experience including time on the Tyson Junior Tour prior to it being cancelled for two years due to COVID. In 2019 he finished 3rd overall in the Juvenile Division on the Tour which included placing first at Sawmill Creek and first at the Sarnia Golf and Curling Club. He also won the Wardsville Junior Club Championship and won first place at the Optimist Tournament at St. Mary’s.  The win at St. Mary’s qualified John for the Optimist International Junior Golf Championship which is being held in Miami from July 24-29 at the Trump National Doral Resort.

“St. Clair College is a perfect fit for me academically and athletically and I can’t wait to get started,” stated Van Bilsen. “I was so impressed with the school during my visit and I hope to be a great addition to the golf team moving forward.”

Head Golf Coach Kevin Corriveau is excited for Van Bilson’s addition to the team. “John is an outstanding young talent that will be a huge addition to our program. We expect great things from him in his time at St. Clair.”

The golf program is also excited to announce the addition of assistant coach Katelin Lawson. Lawson, a LaSalle native, is a PGA of Canada member and former NCAA Division I golfer with over 17 years of experience playing, working and volunteering in the golf industry. Katelin completed her degree in Criminology. She competed for one year at the University of Tampa in NCAA Division II then transferred to Eastern Michigan University (NCAA Division I) where she was an Academic Mid- American Conference team member and a three time All American Scholar.

Katelin is looking forward to joining the Saints coaching staff. “I am excited to begin my golf coaching career with St. Clair and so glad I can start to give back to the game that has given me so much. “