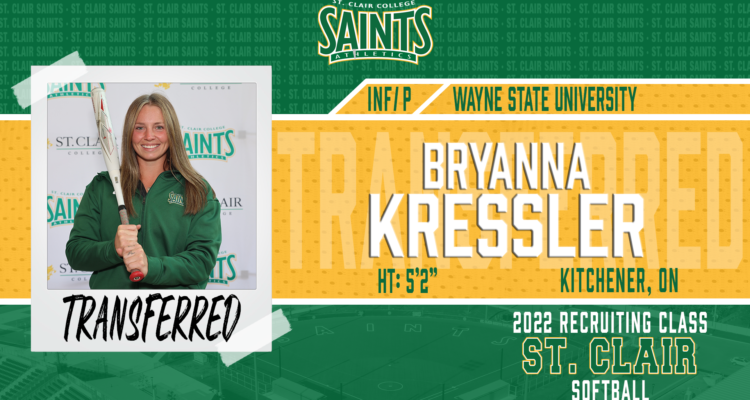 Windsor, ON – The St. Clair College Women’s Softball team welcomed the transfer of 5’2″ infielder/pitcher Bryanna Kressler leading into the 2022 season.

The Kitchener native was a GLIAC Freshman of the Year for Wayne State in 2018 and a 2-time All-conference performer while hodling a career .323 batting average at the NCAA Division II level in addition to Honour Roll status while graduating from Kinesiology.  She saw time in the infield and outfield in addition to pitching her rookie season where she compiled 2.37 ERA over 76.2 IP including six complete game performances.

Prior to that Kressler competed in four sports at St. Mary’s High School (Kitchener, ON) and was a 2-time Senior Athlete of the Year with Honour Roll recognition in the classroom.  She also was a standout player at the club level with the Kitchener Klassics, Guelph Gators and Windsor Wildcats receiving acknowledgment at the 2018 and 2019 national tournaments.

Saints Head Coach Doug Wiseman said about the Kressler transfer, “We are thrilled to add Bryanna to our program as she is a versatile player capable in multiple positions at a high-level including pitching.  She will add experience, determination and intensity to the team.”

Wiseman continued, “Bryanna really enjoys the game and with her work ethic we expect her to be an impact player for us.”

Due to the pandemic Kressler has two years remaining of her eligibility for the Saints and will be enrolled in St. Clair’s Fitness and Health Promotion program this fall.